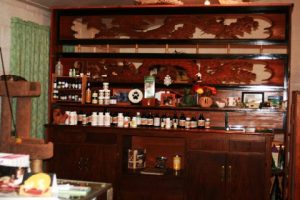 Dr. Rena Ferreira, a gifted veterinarian also trained in acupuncture, had a ranch call practice caring mainly for horses, llamas, goats, sheep and cattle. Seeing the tremendous improvement resulting from acupuncture treatments on their large animals, many of her clients begged Dr. Rena to try it on their smaller companion animals. In 1997 she started a small animal acupuncture clinic in a room of the old post office and café in Gold Run, a small town in the Sierra Foothills grounded in California’s gold mining history. This is where the Sierra Animal Wellness Center story began.

In September, 2000, Dr. Peggy Roberts met Rena at a seminar on llama medicine. Feeling some frustration with the limitations of conventional medicine, Dr. Peggy had become interested in practicing veterinary medicine in a more holistic way. She asked Rena if she needed any help, and Rena, in a constant state of overwork, said she would love to have someone come in to handle the day-to-day emergencies so she could focus on her passion, acupuncture and Chinese medicine.

On an almost daily basis Dr. Peggy had the opportunity to observe the successes Dr. Rena had with patients that had not been helped with conventional western medicine. Inspired by those successes and Rena’s encouragement, Dr. Peggy was accepted and entered the International Veterinary Acupuncture training program in October, 2003. She completed the program in March, 2004, and then began the Chinese Herbal training program with the Chi Institute in Florida. Since 2004, Dr. Peggy has completed about 100 hours of training in Traditional Chinese Veterinary Medicine including herbal therapy, Chinese food therapy, and Tui Na medical massage. She has also completed advanced training in aquapuncture. With 12 years of learning from her patients' response to these treatment modalities, she is convinced that integrating eastern medicine with conventional western medicine is the most beneficial way to address illness/imbalances in animals.

Since this journey began the demand for Holistic Veterinary Care has been steadily increasing. The clinic expanded to fill the entire building in Gold Run, a satellite office in Colfax was added in 2010, and in August 2012, the two smaller clinics were combined and we moved to a larger building in Colfax, California. Over the years our staff has grown from one to eight.

Go to our references page to see some testimonials from owners whose pets have benefited from our care.